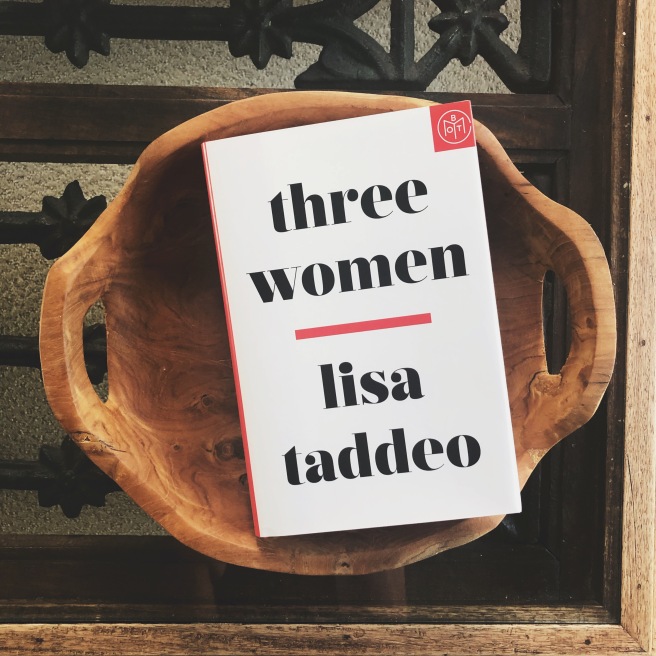 Three Women is THE book of the summer; it’s literally everywhere! So far the reviews have been overwhelmingly positive, so it’s with a great amount of hesitation that I am here to say – on record – that it just wasn’t that revolutionary for me. 🤷🏼‍♀️ I think my expectations were completely off…if it would have been like I thought it was going to be heading in, it promised to be not only one of the best books of the year, but of all-time. Sadly, it fell extremely short of my expectations, and it truly bummed me out.

What I did love about this book was Taddeo’s writing. It’s off-the-charts fantastic (though some of her metaphors were a bit of a stretch) and for that reason alone, I think you should read this one. She took a fairly taboo nonfiction topic (women’s sexuality and desires) and made it read like a page-turning fictional novel. I was immersed in each of these women, though I definitely cared the most about Maggie’s story. Again, for Maggie’s story alone, I encourage you to read this book!

I was enflamed with the way Maggie was treated by a person in a position of trust and the way her community hung her out to dry. The repercussions to her life were far-reaching and she is still dealing with them today. I hope the publicity of this book forces the people – especially the school district of Sheyenne High School – where Aaron Knodel is currently employed.

Other than those two things, the rest of the book didn’t do much for me. I’m very confused as to what Taddeo’s thesis was…the reviews and articles I’ve read make me feel like she was trying to teach us to not judge other women and the decisions they make – specifically, the sexual choices she makes – but that did not come through clearly to me at all! With the exception of Maggie, I didn’t feel connected or sympathetic or enlightened by either Lina’s or Sloane’s stories. They ultimately just distracted me from the only story I really cared about – Maggie’s.

There were parts of each woman’s story that I could relate to, but they are fleeting examples and I truly just feel like I’m grasping for any straw to feel a connection to these women. Lina’s affair felt like justification for her lack of sexual attention from her husband, and while I’m not supposed to judge that decision, I also cannot just gloss over her behavior towards herself, her husband, or her lover’s wife and children. As a society, we’ve never allowed a man to justify his behavior, so why should women be allowed to? Poor Lina has a long list of issues that would be best served with some therapy, and not allowing her self-worth to be determined by some guy from high school.

Sloane’s story is the one that stuck with me the least. She just feels like a privileged white women who demands a lot of attention to fuel her self-worth. I saw such a lack of depth in her character and her story. I felt sorry for the wife of her lover and felt her inability to give the wife the answers she asked for was cowardly and turned me off from her entirely.

Overall, out of the thousands of women she interviewed, I am surprised that these three – actually, two – were the ones Taddeo chose to highlight. I would have assumed there was much more depth and complexity and enlightenment in other women’s stories.

To be fair to this book, here is a link to an article written by Stephanie Danler. She loved this book and wrote quite an insightful and well-thought out review.

This feels like the exact, perfect vibes for October. ✨
We’re in the last quarter of 2021, so I made a pile of books I want to get to before the year is over.
SEPTEMBER READING WRAP-UP || {#partner #freebook indicated by *)
During the summer of 1955, Ethan’s dad drops him off in a small Alabama town known for it’s racist and separatist mentality. Ethan is biracial and normally lives in a more racially accepting environment in Washington state. He is quickly introduced to ways of the South…but thankfully he befriends a red-headed, quircky girl, Juniper Jones. They decide to make the summer one they’ll never forget but have no idea how true those words will be by the time Ethan is ready to head back to Washington. I’ve said it before and I’ll say it again: it’s sad that we’re sixty years past the timeline of this book and yet so many of the themes still ring true today – racism, cruelty, and unacceptance. This book is unforgetable and reminds us that we can still always do better.
I absolutely loved everything about this book – a strong contender for my final Top 10 List at the end of the year!
This is one of those books that fall under the category ‘Truth is Stranger Than Fiction”. I kept getting Educated and The Glass Castle vibes; one of those crazy coming-of-age tales that just blows your mind. I loved Diamond’s metaphorical writing and really sunk into the audiobook version of her story. I wish the momentum it starts off would have lasted throughout the entire book, but about halfway through, the story started to fizzle out for me. Regardless, it’s an incredible story and I’m glad I listened to it!