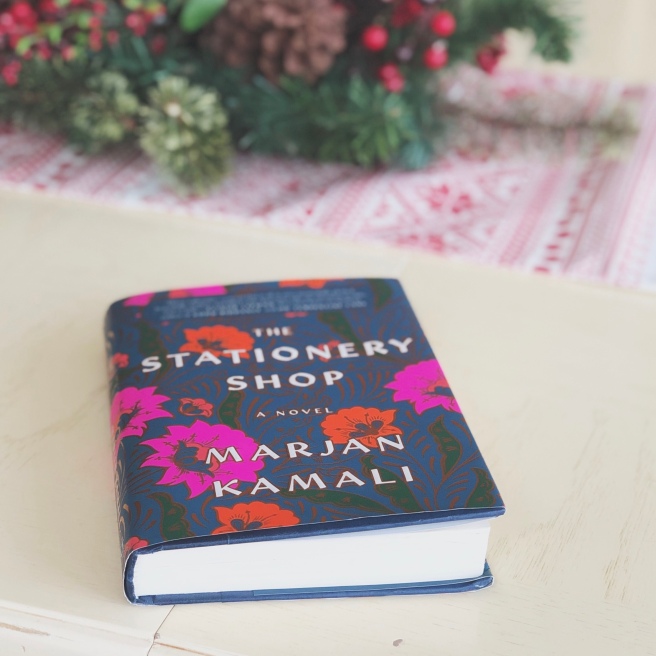 Roya’s mother had always said that our fate is written on our foreheads when we’re born. It can’t be seen, can’t be read, but it’s there in invisible ink all right, and life follows that fate. No matter what.” (pg 4)

The Stationery Shop is a book that inadvertently explores that idea. Roya is supposed to meet her boyfriend, Bahman, in the town square at a particular time, but on that same day, there is a staged coup to overthrow the Iranian leader. They never end up meeting and, as a result, both of their lives drastically change direction.

Roya moves to the United States with her sister to pursue an education. Bahman ends up marrying a woman of his mother’s choosing. Through a mutual friend, Roya and Bahman keep track of each other’s lives. When that friend dies, their “connection” to each other is lost. Life goes on (as it does) until Roya encounters a man that strangely reminds her of her long lost love. Will she finally find out what happened that day, sixty years ago, that changed the direction of her life forever?

“We do not always get what we want, Roya Khanom. Things do not always work out the way we planned. Those who are young tend to think that life’s tragedies and miseries and its bullets will somehow miss them. That they can buoy themselves with naīve hope and energy. They think, wrongly, that shomehow youth or desire or even love can outmatch the hand of fate. The truth is, my young lady, that fate has written the script for your destiny on your forehead from the very beginning. We can’t see it. But it’s there. And the young, who love so passionately, have no idea how ugly this world is. This world is without compassion.” (pg 127)

What worked for me:

What didn’t work for me:

Overall, this was a great book and I would recommend it to others. The few things I didn’t like about it weren’t deal breakers. Thoughout the story, I had hope for Roya and Bahman ending up together, but even when they didn’t, it was satisfying to know that they both had happy and fulfilling lives. The story came full circle by the end and it was the perfect feel good story admist the craziness of the holiday season!

Below, you’ll find some discussion questions. Please reply and discuss at your leisure. Beware…there could be spoilers!

Stay tuned for the January selection which I’ll be announcing on January 2, 2020! I hope you’ll join me for the buddy read and the discussion to follow!