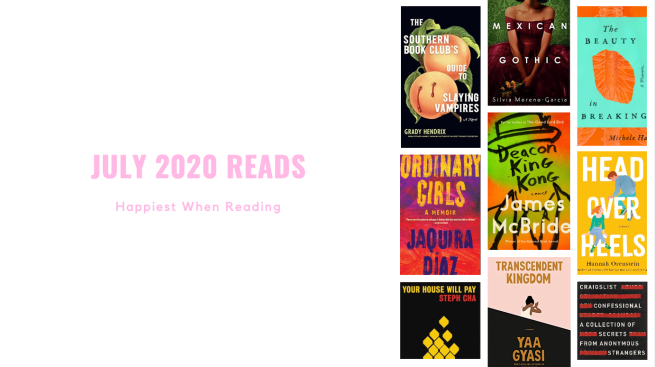 My reading life is just like real life – an up and down roller coaster on the daily. Some days I’m excited to read and other days…not so much.

July By the Numbers:

Favorite Book of July Without a Doubt: *** Deacon King Kong 🧡💛

Hands down…it’s my favorite book of the year so far!! I loved it so much!

This book tackles some serious subject matter, but also has some witty one liners that literally had me lol’ing! There is the most delightful cast of characters, but especially Sportcoat.

I LOVED this book so, so much! Please put it on your TBR immediately! 🌟🌟🌟🌟🌟

Here is an honorable mention:

If I’m being honest, having people pick my books doesn’t really excite me, so after I had one book picked (to fulfill the challenge), I focused my attention on ready NetGalley/Edelweiss books in an effort to get some of my ebook TBR numbers lower. Unfortunately, it doesn’t feel like I even made a dent, so I may extend this to August’s TBR (stay tuned!).

I also read the following books:

I tried but wasn’t feeling:

I recounted my books because I SUCK at keeping track of these details. I will try harder for the second half of 2020,🤞🏼but we’ll see how it goes. Either I’m not organized enough, I’m too lazy, or my system doesn’t work, but my numbers never seem to be accurate.

Here’s the thing: these piles of unread books are driving me crazy! I want/need these numbers to dwindle down for my sanity’s sake. What’s kind of making me sad is that my numbers haven’t decreased at all despite my purging and reading mostly from my already owned shelves! 😳 For whatever reason, that stresses me out!

I acquired 22 books in July.

My newly updated totals are:

I’m still loving this challenge though I do feel like I lost sight of it due to everything else going on in my life. If you’d like to participate, head over to Whitney’s blog for more information!

There you have it! What was your favorite read from your July TBR?

(#partner #freebooks: All books noted by asterisks (***) indicate I received the book for free from the publisher, the author, or another promotional company to review. All opinions are my own.)